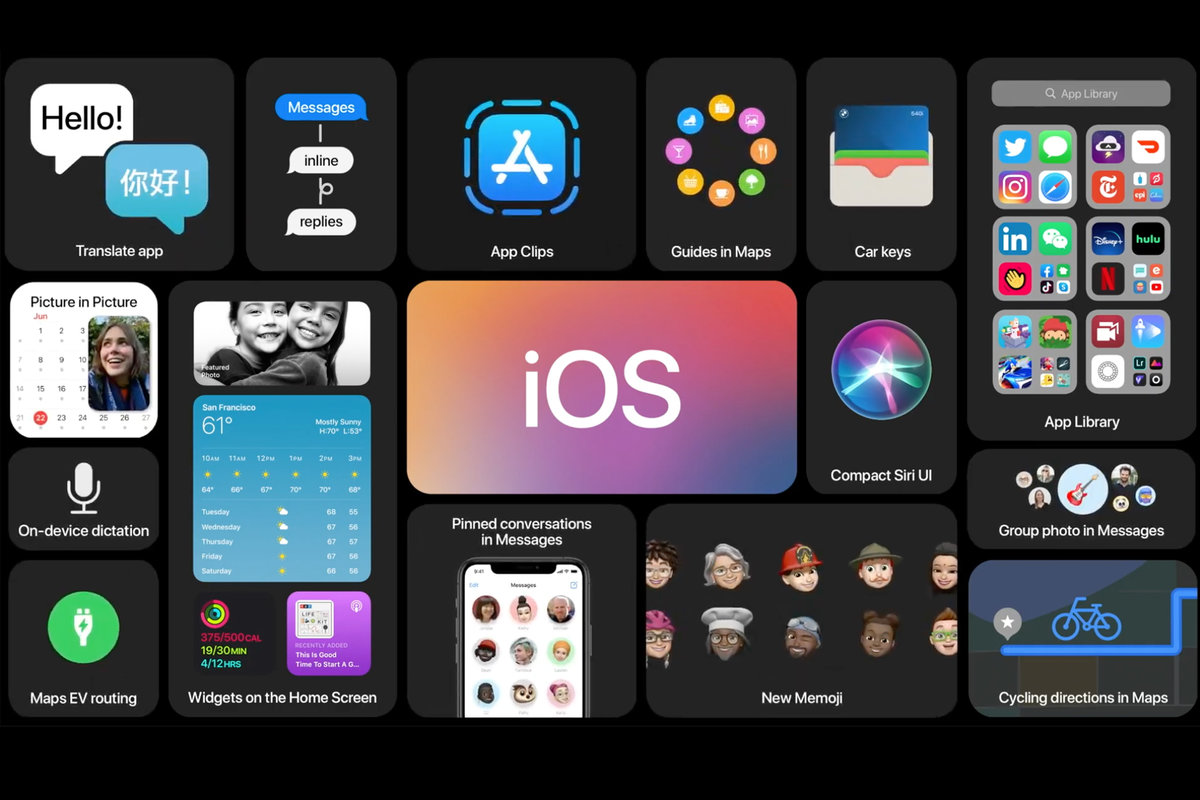 iOS 14 and iPad 14 were introduced by Apple on September 16. There are quite amazing features included in both that simplify users operations. From a completely new home screen to improvising iMessage significantly, Apple has managed to produce the biggest software update ever released.

We asked top iOS development companies and we got some amazing reviews regarding iOS and its advanced features. In this article, we have documented the top 10 features of iOS based on how a common user utilise smart devices(iPhones, iPad). So, without further ado, let’s dive straight into it.

The first thing you will notice is the updated home screen when you install iOS 14 on your iOS device. The home screen contains large widgets icons, Siri voice assistant, App library, and Compact Calls. Previous iOS versions showed us how widgets were only available in the ‘Today’ side dock, but with iOS 14, you can easily drag and drop widgets on your Home Screen.

You can organize widgets as you like, and more importantly, you can also resize the widgets as per your requirements. In addition to that, you can also select which widget you want to display on your home screen. To do this all you need to do is hold down your finders on Home Screen until you see the icon shaking, now tap on the + button to get the widget on your Home Screen.

The new app library will solve one important issue which emerges when you could not find a specific application from the various apps available on your Home Screen. New iOS 14 comes up with this amazing feature that enables users to hind the applications that are not commonly used. Later, you can access them through the App Library.

This feature lets you organise your application based on the categories of application such as Suggestions, Recently added, Social, Entertainment, Creativity, Shopping, and many more. The app you use frequently will directly appear based on machine learning.

To launch App Library, all you need to do is swipe right on the home screen. Here, you can easily search for a specific application, and also see all the available apps just by scrolling down the menu.

Back in 2012, Apple map has faced a lot of criticism regarding the bug-ridden app. Since then, the organisation has constantly been trying to make it better and robust for day to day use. Now with iOS 14, many issues have been already solved in order to provide a better navigation experience. Now, we can say that Apple Map is giving a tough fight to Google Maps.

In iOS 14, Apple has added distinctive features to the Maps application. It offers an integrated travel guide, speed-trap warnings, a red-light camera, cycling navigation, routes with less traffic, and many more. Apple has worked thoughtfully to design an integrated Guide feature that helps you create a guide whenever you leave for any location.

If you happen to like any place, you can tag it and later you can find those places assembled in the list. Now, if you want to know more about the place like pictures, addresses, descriptions, reviews, and many more, you just need to click on the place mentioned in your list.

This is one of the most popular and used apps on iOS 14 devices. With every new update, Apple makes improvements, this time with the Message application. Apple has introduced Pin Conversations, Group Chats, New Emojis and stickers which help users streamline and established easy communication.

With the new update, you can bookmark important conversations. You can pin 9 conversations to the top of your conversation list. Its feel like adding up your favourite contacts for future communication.

Another interesting feature called ‘inline reply’ allows users to send replies to a specific person from a group chat itself.

The word seems smaller with the arrival of the latest technologies and smart devices. Whether you travelling to a foreign country or living in a multi-cultural society, language could become a barrier that you have to deal with in order to complete your operations.

When you meet people from different countries, chances are higher that the language you speak might differ. To solve this issue, translation apps have been introduced. It helps you translate the language in your native language so that you can easily communicate with each other and convey your message.

Apple has launched iOS 14 with this amazing translation app that includes 11 languages across the globe. The languages are English, German, French, Spanish, Italian, Chinese, Korean, Japanese, Portuguese, Arabic, and Russian,

You can select the language from the translation app, and then rotate your device sideways. Now, all you need to do is click on the microphone and start taking. The app will translate what you speak, then you can click on the translated sentences to get it heard/read loudly.

Just like other features, Siri has also been redesigned in iOS 14. Before, this feature used to cover the whole screen when you activate, which now is displayed in the small sphere-like icon in the new update. Whenever you ask a question to Siri, it will provide the answer in a small text bubble on top or bottom of your home screen.

The current Siri is more powerful in terms of providing accurate answers to your queries. Apple has been working on making Siri more advanced compare to its earlier versions. Now, it is able to deliver 20 times more facts and also utilizes the web more profoundly to search answers based on your queries.

The most amazing feature that Siri offer is that now you can directly access the Translation app through Siri. For example, just say ‘Translate’” what are you doing?” in Russian, and Siri will come up with the sentence translated in the Russian language.

In today’s world where every step of your is being tracked by Facebook, Google, and other companies, data privacy has become an important factor. And, if we talk about Apple’s privacy, then it has always been top-notch. Apple is renowned as the leader in safeguarding the privacy of its customers.

With iOS 14, you get more control over your data, here you can specifically decide what information you want to share. The apple privacy feature will notify you every time when an app uses your camera, microphone or contacts.  As soon as any app use your camera or microphone, a small dot will appear on the screen notifying you about the app using your data.

In previous iOS versions, you need to grant permission to the app for accessing your entire gallery. But, with iOS 14, you can decide which specific photo you want to share with the app. In addition to that, in iOS 14 you can provide your approximate location rather than permitting the app to use your accurate location.

Car companies nowadays are providing their customers with the option to control their vehicles with digital smart keys. Now you can add your car key to the Wallet app provided on your iPhone. In the upcoming future, more such advanced features will be added to the car, and users will be able to control their cars using smart devices and digital keys.

As you have access to your car keys through your wallet app, you can easily control your vehicles using iPhone or Apple Watch. The best thing about digital car keys is that you can share them with iMessage, also you can limit the top speed and radio controls using digital keys.

This is one of the most amazing features that iOS 14 has come up with. It enables users to do multitasking while using a specific app. Now, you can watch videos along with using any other app on your phone. For example, if you are watching a thriller movie on Netflix, and suddenly a message pops up, you do not have to close the application, you can still reply to the message.

The video app supporting these features will have an icon placed over the home screen. So, whenever you are watching a video, you can access that icon, drag it anywhere on the Home screen, control the video functions, and more importantly, resize the video to be fit on the whole screen. The feature also works with Facetime, you can attend calls while doing multitasking.

iOS 14 has introduced shortcuts features to help users perform certain actions, like taking selfies, launching notification menus, unlocking/locking phones. Just by taping on the backside of the iPhone, you can take screenshots. To enable this functionality, navigate to the Settings → Accessibility → Touch → Back Tap → Double Tap or Tripple Tap. Based on your convenience, you can define functions with a specific number of touches.

Another amazing feature called Facetime Eye Contact which was supposed to be launched with iOS has now secured its place in iOS 14. This feature automatically detects your eyes and place them in front of the camera. You can enable this by navigating to Settings → FaceTime → Eye Contact.

We hope this article will help you know the amazing features of iOS 14. As per the users’ specific requirements, one can access them. As a matter of fact, nowadays, whenever clients plan to hire iOS developers from India, they do carry questions regarding iOS 14 during the recruitment process. Tell us what you think about this article, do share your views in the comment section below.

5 Ways to Transfer Files Between iPhone and Mac

How to Merge or Delete Duplicate iPhone Contacts

The Advantages of Online Slots

Why Silicones is Optimal for Efficient Foam Control

Top 5 Umpires in the history of Cricket

Building Your Character in New World

The symmetrical relationship between AI and creativity: Creativity, computation and cognitive application domains

Select the five best cryptocurrencies to invest in 2022

How Do We Sign Up For Fun88 Online Gambling And Play Online Casino?