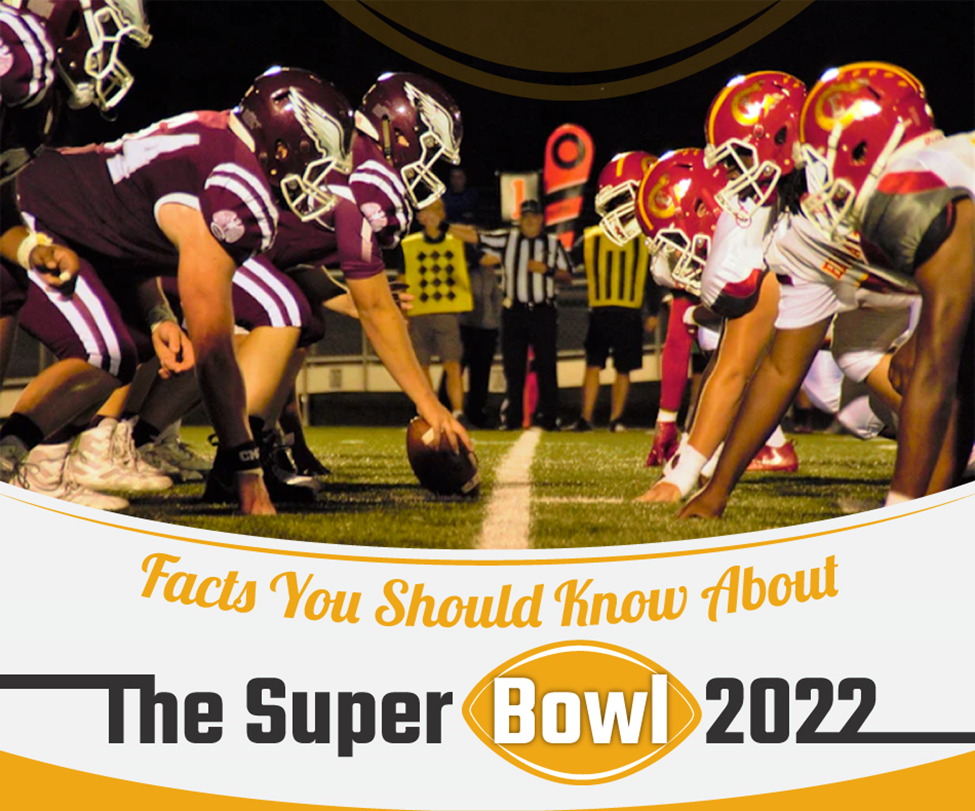 Everyone knows the Super Bowl is the biggest game in the year for a football fan.

No matter how much you are crazy about the Super Bowl, you probably did not know the interesting Super Bowl facts that will keep you excited about the major sporting event.

The enormously famous event was started on January 15, 1967. The game back then was termed as AFL-NFL world championship game.

What is the Super Bowl?

The Super Bowl is a major event that brings excitement for everyone for sports, entertainment, and food. Supporting your team, excited about the halftime show, or engaging in super bowl squares, The Super Bowl brings a package of entertainment for you.

When and Where is it Held?

Super  Bowl LVI will kick off on Sunday, February 13, 2022, at Sofi Stadium in Los Angeles at 6:30 p.m. Los Angeles has been hosting the league eight times this year.

According to the NFL, a new 17 game schedule is determined this year, likely pushing the super bowl in the middle of the Beijing Winter Olympics.

The online streamers can enjoy the game via NBC’S streaming service, Peacock. The game will also be broadcast live in Spanish for the first time.

Who will be Performing at the Half Time in Super Bowl 2022?

These legendary rappers will perform for the major sporting event this year. Blige is the only artist who has already performed for the super bowl before in 2001’s show.

Surprise guests also perform at the stage, but not sure about this year. These five performers are currently on the news charts.

The halftime show is expected to begin at 8 p.m. ET.  There is a fact about the halftime show many of you did not know, the artists who perform at the super bowl do not get paid. The publicity they get worldwide is more enough than a payment.

Many famous Singers have performed in the halftime performance of the Super Bowl for years.

Which Team Has the Most Super Bowl Wins?

The greatest number of super bowl wins by one Team is six. Two teams in the game’s history have this title New England Patriots and the Pittsburgh Steelers. The San Francisco 49ers and Dallas Cowboys are in line with 5 super bowl wins.

Which Team has lost The Most Super Bowls?

The Denver Broncos and patriots have 5 losses each. The broncos achieved victory 3 times; recent was in 2016. While this year did not seem, the Broncos have a chance.

Sofi stadium has the capacity of 72,067 viewers for the major bowl LVI. If you are a football fan and want to see the live magic of the super bowl, we will update you about the tickets for the game. The official ticket partner of the NFL is Ticketmaster.

They will deliver you original and verified tickets on time. Mobile tickets are easy to access to the stadium without any difficulty. To prevent any inconvenience, the NFL has its official ticketholder app to access mobile tickets.

The costs of tickets vary from the location of the stadium. Probably, the average super bowl LVI ticket range from $5,950 to $21,250 per person, depending on the position of a seat

The ads and commercials during the ongoing event are highly valued. To generate high revenue, the price for 30- a second ad is $6 million. That is comparatively huge in comparing the first game, which costs $40,000 for ads.

The silver trophy is formed by tiffany & company. The super bowl winner got the trophy, which has numbers, the date, the Team, and more details. The trophy weighs 7 pounds.

The Lombardi trophy is 55cm in the middle, 71 cm from the end. It is a total of 22 inches in length. The sterling silver trophy is created in a four-month-long process.

The Super Bowl is a popular game, which has to determine the champion for NFL. Millions of People gather to watch it. Super Bowl is broadcast in 170 countries. It is one of the most-watched events in the world. The people celebrate this as a De facto national holiday.

The venue for the event is being changed every year. The super bowl is termed a major traditional event held in the US. Millions of people enjoy the event. In 2021, the NFL’s 2021 got 96.4 million viewers. The people tend to enjoy the game not just from the stadium; the viewers enjoy the event from local bars and restaurants or get together.

What is the most effective strategy to promote fantasy sports?

How Technology has Improved Your Favorite Sports

Tips for Knowing When You Need to Upgrade Your Smartphone

How To Run Your Small Business More Efficiently