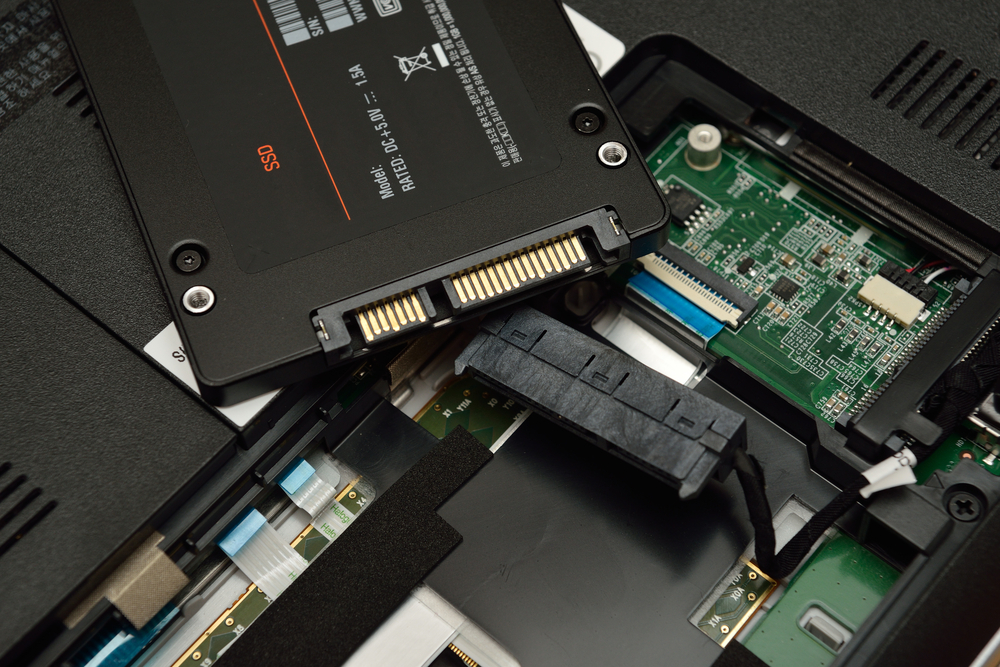 A solid-state drive (SSD) is an advanced new-generation solid-state storage device that stores data on interconnected flash memory chips. The solid-state drive’s files are saved on a grid of NAND flash cells, each of which may hold between 256 KB and 4MB. In comparison to HDDs, SSDs are often speedier, reliable, secure, and more dependable. They’re typically found in the most recent systems and high-end computers, such as the Apple MacBook Pro, Spectre x360, Zephyrus G15, and other high-end laptops.

SSDs are best suited for businesses and corporations that deal with huge amounts of data (such as programming environments or data analysis). SSD offers superior performance and boosts the boot time and windows performance as well. Most of the SSDs are water-resistant, shock-resistant, and can withstand common drop, wear, and tear. Furthermore, SSDs are used in gaming, content creation & video editing, digital music players, smartphones, tablets, and thumb drives.

What are the advantages of using SSDs?

SDDs feature a lot of advantages that can add great value to your computer systems. The following are the advantages of using an SSD.

SSD is a small and lightweight portable storage device that is ideal for small laptops, tablets, and other mobile devices due to its compact architecture. SSDs are resistant to regular drops and scratches, so users may carry them in their pockets without danger of fall and breakage.

SSDs don’t produce noise as they don’t have any moving parts, platter, or spinner. Instead, it uses a computer chip to store data. SSD is a non-mechanical storage device that comes in pocket-sized, which is easy to carry while you’re traveling.

SSDs consume less energy as compared to a traditional HDD that has a magnetic disk which produces more heat and energy. The battery longevity factor of small devices including mobiles, tablets, and laptops is improved with the use of SSDs. Devices that utilize SSD are more energy-efficient and shock-resistant. SSD is an ideal option for video editing and gaming as it boots the speed and efficiency of the system while utilizing maintaining the performance as well. SSDs don’t heat up and overload because there is no spinning platter, as a result, the system becomes more reliable, durable, and energy-efficient.

HDDs are delicate devices that can easily damage by even modest drops or shocks. SSDs, on the other hand, are dependable and long-lasting because they can endure frequent drops and shocks. Although portable SSDs are mechanically superior, they can wear out due to frequent use, as indicated by P/E cycles (programmed and erased). Unlike hard disc drives, SSDs contain a software mechanism that may foresee failure and avoid data loss permanently. Even if an SSD fails, you can read the data that has been written to it, and it can be programmed to save data in cache memory in the case of a power outage.

SSDs provide faster data transmission, a faster boot time, and more bandwidth. SSDs are a hundred times quicker than HDDs, allowing them to process data at lightning speeds. SSSDs help computers to boot faster because the disc does not need to spin up, resulting in improved computer performance. It has made data access faster and faster in today’s industry, where storing and accessing a huge amount of data is critical.

SSDs’ advanced encryption standard (AES) capabilities ensure the protection and security of your valuable data. The encryption of SSDs is accomplished by a cryptoprocessor built into the device. Encrypted SSDs encrypt all data written to NAND FLASH, including hidden and temporary files that may contain sensitive information, clearly and fully. An encrypted SSD has the advantage of running at full speed without affecting the system’s performance.

SSDs offer faster read and write speed as it doesn’t have a drive platter or actuator arm for moving the read/ write head. The read and write data occurs on a flash memory chip instantly in SSD that gives the best reading and writing speed. It also helps the user to access data faster and retrieve significant information in a minimal time without waiting for hours.

SSDs have a compact and ergonomic design, which makes them suitable for portable devices like smartphones, laptops, and tablets. SSD has no size limitation because of which you can choose it for the storage purpose for your portable devices.

SSDs are available in three sizes: 2.5′′, 1.8′′, and 1.0′′. SSDs may readily and swiftly replace hard disc drives because of these qualities. It’s no wonder, then, that most computer users are advised to utilize SSDs as their primary driver for their operating system and critical applications.

What are the disadvantages of using SSDs?

Apart from the great advantages of SDDs, there are certain disadvantages too that are as follows.

The main disadvantage of an SSD is that it’s very costly as compared to HDD. The cost of SSD is twice that of SSD, and that’s the reason why people choose HDD instead of SSD. Moreover, the designing and manufacturing process of SSD is more expensive which makes it a costly storage device on the market today. If you have a good budget and a new-generation laptop and PC, then you can go opt for SDDs, whereas if you are under budget and want to purchase a cost-effective storage device, then it’s suggested to purchase a hard disk drive that offers maximum storage capacity along with some other advantages too.

An SSD’s storage capacity is limited to specific values, with the base storage space of SSDs being roughly 128 GB. The storage capacity of SSD is significantly lower as compared to HDD. Even though there are some high storage SSDS, they are rarely available and hard to find. Furthermore, you may expect to pay more money for SSDs with larger storage capabilities. HDDs, on the other hand, offer more alternatives and are more cost-effective. An SSD is not an ideal option for those organizations and businesses that need more storage capacity to store large files and to run engineering projects. However, it’s best for students and teachers who barely need large storage devices for data storage.

An SSD is an excellent replacement for HDD, especially when it comes to mobile phones, laptops, or notebooks. But the main drawback is that they are limitedly available. They are harder to find in the marketplace because of the higher price tag. However, if you really need an SDD, then you may find the best online places selling a portable SSD. As the demand for portable technology is increasing day by day, it’s expected that the availability and manufacturing of SDD will increase significantly in the future.

Although SSDs are very durable and portable, what makes them lack behind is their short lifespan. As we discussed above that SSDs don’t have a drive platter or actuator arm for moving the read/ write head, instead, it uses the NAND chips. The NAND chips undergo many read-write cycles which lessens the lifetime of SDDs as compared to HDDs. This disadvantage of SSD makes it less worth purchasing storage devices as people prefer to purchase a device with a longevity factor and better lifetime capacity.

One of the biggest disadvantages users encounters while using an SSD is critical data recovery. Data Recovery in SSDs is much harder and more time-consuming as compared to HDD where users can quickly recover data with the help of a skilled data recovery service. Data recovery is essential because we don’t know when our data get lost or corrupted. For this purpose, you need to have a storage device that can easily and conveniently recover data. In SDD data recovery is not impossible but it takes more time to recover even a small amount of data, which frustrates users. Therefore, it’s essential to back up your data if you are using an SSD so that you may quickly access the data at an urgent time without the need to recover data. However, in the future, it’s expected that the manufacturer of SSDs will overcome the data recovery problem by providing a quick data recovery option.

For users who work with lower-end devices and want to purchase an SSD for their system, then it’s essential to check the compatibility of SSD with your device as most of the SSDs are non-compatible with lower-end devices. The reason is due to their low cost and lower-end gadgets. Moreover, they also don’t have an SSD slot, making them incompatible. The processor in the lower-end device is unable to fully utilize the SSD.

SSDs aren’t available on every device. SSD is only supported by the latest PCs. For devices like CC TV cameras, there is no SSD support. The majority of them still use hard disc drives. SSDs are also less common than HDDs in terms of availability.

This disadvantage is somewhat relative because it is dependent on the SSD generation. Some older drives, for example, are less expensive, but the first ones on the market had a greater failure rate. The majority of frequent failures have been resolved over time, although the economic aspect is also involved. You could be tempted to purchase an older SSD, and in most cases, it is well enough. Failures, on the other hand, will be rather complicated.

The upcoming laptops and PCs require a top-running storage device with advanced features, high-quality speed, performance, reliability, and much more. Here SSDs come into the game with their outstanding features and advantages, which makes them the best storage device. But before you proceed ahead of purchasing an SSD, you must know the advantages and disadvantages it offers, so that you may purchase one according to your need and requirements. And to help you out with this matter, we’ve created a list of the different pros and cons of SSDs.

Freya Buring is the Digital content curator at Get IT Equip. After studying English Literature at New York University, she began her career as a Content writer before moving towards the Technology industry. Freya enjoys her job requirement of keeping up with Technology topics, particularly when it comes to Hardware.

Why Custom Software Solution Has Become A Must-Have For Businesses?

4 Important Parts of Any Marketing Strategy

How Much Is Your Business Worth?

What is Managed File Transfer? Answered

Cricket and its importance