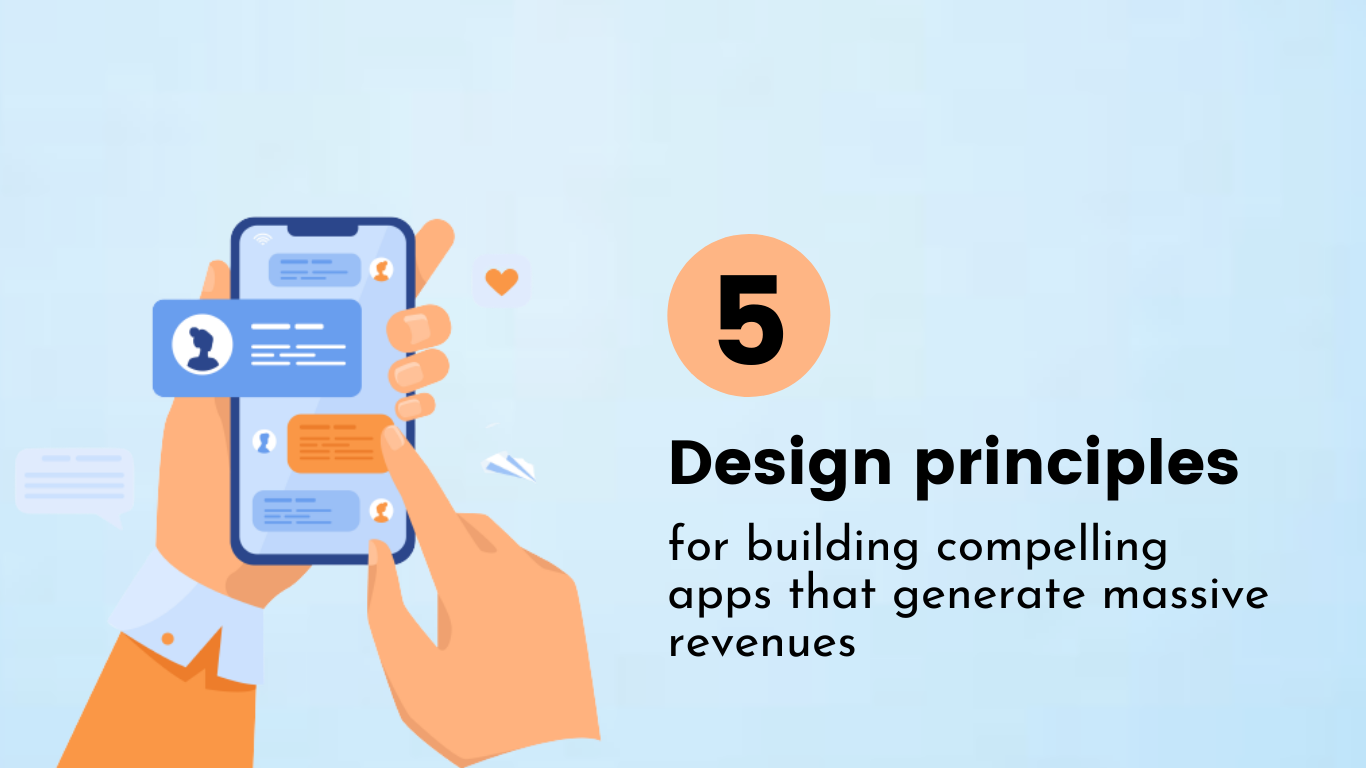 “There are three responses to a piece of design – yes, no, and WOW! Wow is the one to aim for.” — Milton Glaser

The same is the case with mobile apps. Apps have become ubiquitous in modern life, but not all apps are made equal. Some are good, others bad, but only a select few are great. And, one of the biggest differences between what makes an app good vs. what makes it great simply boils down to how it is built, or in other words, app design.

App design is fundamental to how your users experience your app (and, by extension, your business). A well-designed app is vital for your company’s success as it’s the single most reliable predictor of consistent and scalable app growth and user retention and satisfaction.

In other words, without a well-thought-out, well-executed design strategy, your app will most certainly be lost in the app store abyss, never to be found again. For that to not happen, app development companies need to ensure that the software they build is top-notch. While building customer-conscious design is vital and challenging, it isn’t entirely impossible. In fact, much of what great design is all about comes down to simple and intuitive design principles, a few of which are discussed below.

One of the major mistakes most tech entrepreneurs make these days is the fatal assumption that users are likely to use (if not love) their app just because it exists. That’s partly because smartphone usage has steadily increased over the past years, and it’s hard to imagine a world where people aren’t using their phones for an increasing (and sometimes even trivial) array of reasons.

Nothing could be further from the truth, though. People only ever use anything as far as it is useful, and mobile apps are no exception. Pick any of the highest-grossing apps across the market, and I guarantee you’ll be able to articulate in a single sentence what purpose the app serves. Netflix brings engaging, personalized content to the boredom struck, Facebook connects advertisers with the right audience, and Tinder helps you meet new people.

The point is that almost every high-revenue app, at its core, is about addressing a problem that is too important for its users to ignore. So the first principle of great app design, ironically enough, comes into play even before devs fire up their IDEs or designers sketch rough wireframes. It is about coming up with an app idea that resolves real-world problems for its users. Anything less and your app will be a mere digital novelty, with limited shelf-life at best.

The next big design decision you’ll make with your mobile application is the choice of monetizing it. Your business model fundamentally shapes how your app is built and how users interact with and experience it. Picking the right monetization scheme is as much of a design choice as it is a business decision, and both these aspects are much more interdependent than what may initially seem to be the case.

In terms of reliable revenue models for mobile apps, app development companies have a few choices at hand. There are paid apps, in-app purchases, app subscriptions, and in-app ads, to name some of the major ways of monetizing an app. Most apps usually choose either one of these as their primary monetization models, but the decision mainly depends upon the type of app you are building.

Each revenue model is suited for a specific product type.

Monetization strategies can ultimately make or break the final product when it comes to mobile apps. Therefore, pick your business model with caution and design an app that fits well with it.

3. Design for Intuition, Build for Utility

Two questions to ask yourself when trying to design your app’s UI:

Does your app’s workflow feel natural and intuitive?

Do users feel like they were able to get something done by the end of each session?

The truth is, having a good app idea and monetizing it in user-friendly ways is great, but even that’s not enough to retain mobile users these days. User expectations are way above the plane of generic app design, and to build an app that people love to use requires bringing together the power of intuition along with a strong emotional hook, while also being practically useful.

But what is Intuitive design, and how to build it? A design is said to be intuitive when users can use your app without consciously thinking about it. It is the case when the visual elements on the screen make the next step obvious. It is essentially the digital equivalent of apps’ ‘getting out of your own way’ by making their workflow intuitive for the users.

The best way to implement this is, of course, to play into the user’s expectations. The arrow on the top-left side of the screen or the cross at the top right almost always indicates the exit button. So build them to do just that. Subverting user expectations is essentially useless and potentially harmful.

But beyond just making your design obvious to use, you’ll also want to invoke some emotion within your user, and this can be done in a number of ways:

Personalize and personify:  Personalization can go a long way when it comes to convincing a user that the app was ‘built for them.’ At the same time, personification comes down to the level of app-to-user interaction. Personalization is where you can give your app a personality.

Implement Humor: Be funny and positive when implementing tips, guides, and even tiny tool-tips within your app. Humor makes your app feel ‘less mechanical and more real’ and invokes a strong emotional response.

Make users feel accomplished: If you’ve followed tip #1, I’m sure your app allows users to solve a problem or achieve a goal that is important to them. Make sure the app effectively communicates the value it is offering to the user and what they have achieved using it. This will create a positive feedback loop that encourages your users to continue using your app, making them feel more accomplished each time they do.

4. Design an Experience, Not Just a Tool

Micro design, on the level of individual UI elements, is essential and great, but there is a point where it all comes together as a combined whole. This is what your app feels like. It’s good to have an app that does its job well, but it’s even better to have one that does the same and feels great to use.

You need to build an app that offers a cohesive experience. From animations to loading screens and visual consistency to well-matched functionalities, everything looks better when everything fits together as a neat little jigsaw puzzle snapped tight in place.

Building a great user experience is difficult in that sense, but it isn’t impossible. You need to identify your design language (one that is consistent with your brand image, of course) and spell it out in code. Here are a few tips for the same:

A well-designed, cohesive app feels great to use and inspires user confidence which is great because users only ever spend money on products they feel confident about. Therefore, crafting user-friendly app experiences is a sureshot way to improve app revenue.

When it comes to generating massive app revenues, mobile games have consistently been the top grossers for quite some time now. Although apps need not necessarily be games to make good money, mobile apps can still learn a trick or two from mobile games in terms of user engagement and retention.

Even the most popular social media platforms are on the lookout for in-app gamification because it simply works. So what is gamification in the context of mobile apps? And how to implement it?

Gamification is the process of adding game-like features that incentivize and reward certain user behavior. It’s a great way to increase engagement and hook your users in. Gamification can be implemented in a number of ways. Basically, any reward or progression-based system built in your app qualifies as gamification; even in-app quizzes, usage-based leaderboards, and app-offered badges and rewards can be classified as gamified elements.

There are no hard rules about when an app counts as ‘gamefied’, but most companies are sure to benefit from focusing on making their app more engaging. When it comes to maximizing app revenue, retaining and engaging your current user base is as important as growing it, and gamification is arguably the most effective way of doing so.

Mobile apps have become a staple of our digital lives, but their growing popularity and demand have also raised the standards for what makes a good app very high. While building and launching apps has gotten easier than it has ever been, securing app success and making any significant revenue off of it has become equally difficult. Suppose brands wish to leverage mobile tech to boost their profits. In that case, they seriously need to avoid the UX mistakes most developers are guilty of and focus heavily on creating engaging user experiences that offer great value to their consumers. Addressing critical user pain points with a cohesive and engaging app is perhaps the most reliable way to make big bucks within the mobile market.

Author Bio: Darren is a writer passionate about Technology, Business, and the evolving relationship between the two. He often tries to bring intriguing perspectives to otherwise familiar ideas, striving to help his audience reimagine the ever-changing tech landscape. He works as a blogger and content marketeer at GoodFirms—a leading review and rating platform built to help brands pick the right service providers for them

Tasks Of A Dizziness Specialist

7 Tips To Modify And Reuse A Static Caravan

How to Record and Broadcast a Webinar

Five Writing Strategies You Must Know For Effective Communication

Tips On Keeping A Clean Home

Must Knowing Facts on Moonstone Jewelry