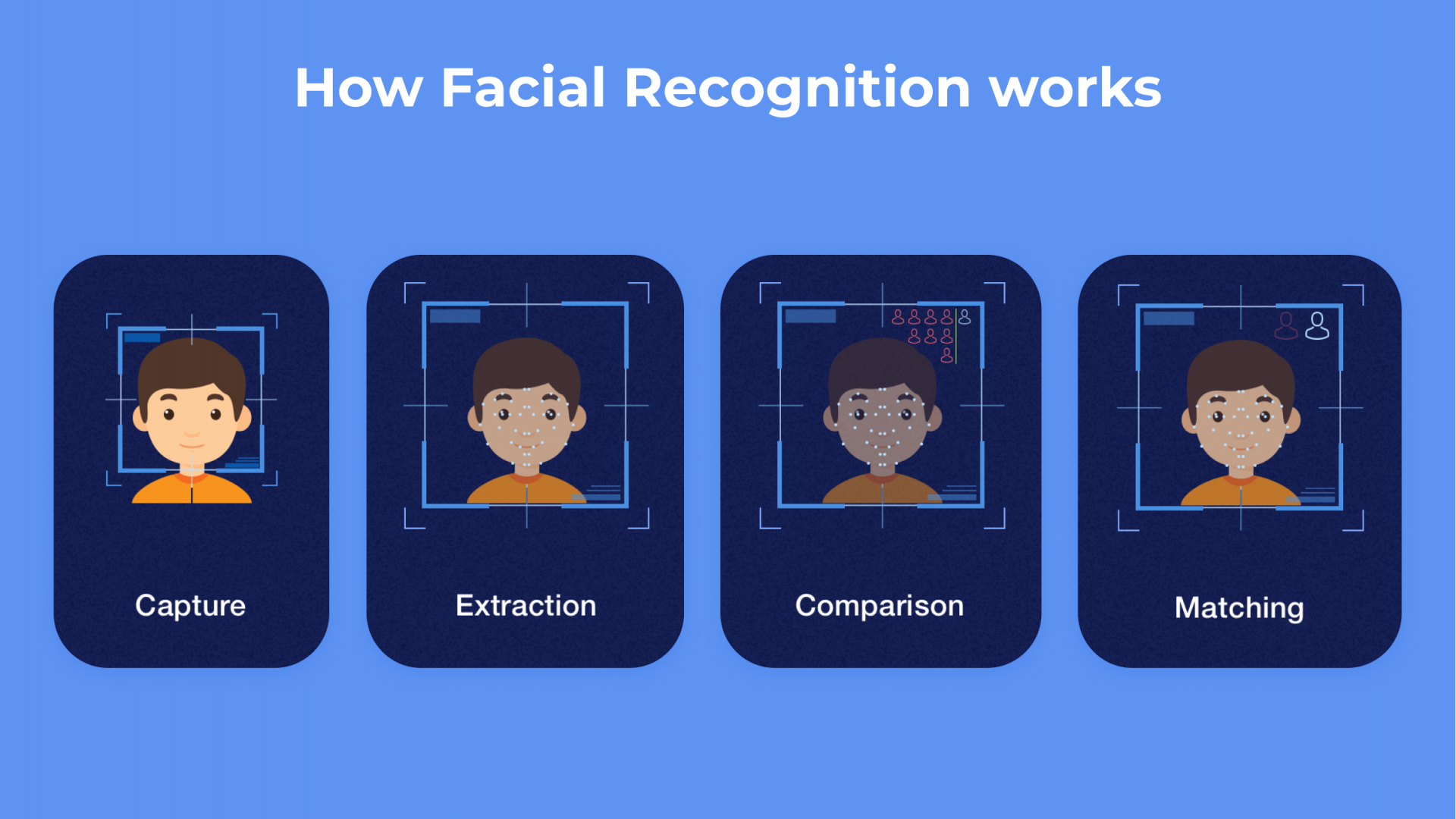 Each person has unrepeatable appearance peculiarities, but scientists have found a way to differentiate them from each other. Moreover, brand-new technologies allow using our unique characteristics to secure our personal data.

Fingerprint scanners are widely used and are not really unique, but there is another biometrical technology. It is face recognition, and it is gaining popularity.

Let’s figure out what makes this technology so outstanding, and how can it advance your platform?

Let’s clarify one significant fact beforehand: Apple’s Face ID and facial recognition are two diverse concepts, so please avoid confusing them. The very first facial recognition feature was implemented into Android application earlier than into Apple’s. It implies that this feature can be implemented into both platforms, but via diverse instruments (we’ll cover them later).

The technology itself works as follows:

The system detects and verifies several parameters of the person’s face using the camera. These parameters include the space between the eyes, mouth position, jaw, and the whole face structure. More than 80 metrics are tracked, marked, and stored in the database to distinguish a specific face.

Before conducting the face-recognizing operation at first time a system registers and memorizes the particular face for future identification. It is also called digital onboarding. After that, the registered user will be recognized by the system.

There are 4 main stages of the face-recognizing process:

First, the system detects and captures the face. If the person looks straight into the camera, this stage will be completed easily, quickly, and successfully. But sometimes there are certain issues, such as insufficient lighting or the angle which complicates the recognition process. However, the latest cameras enable face detection from various angles and lighting.

After that, the program extracts essential data comprising face features and analyzes the image mainly in 2D due to the fact that photos stored in the database are also 2D. After that, it converts this data into mathematical calculations. As it was previously mentioned, this assessment implies distance between your brows, for example.

At this stage, features of the particular face become a mathematical code. The program compares the extracted and converted data with the one which is stored in the database.

This concept strives forward, and there are lots of excellent illustrations of its successful implementation.

The best software for a face recognition

If you would like to create a face recognition platform, you should research the already existing ones.

To define the most successful software for this technology, we’ve described the best facial recognition apps and listed them below: 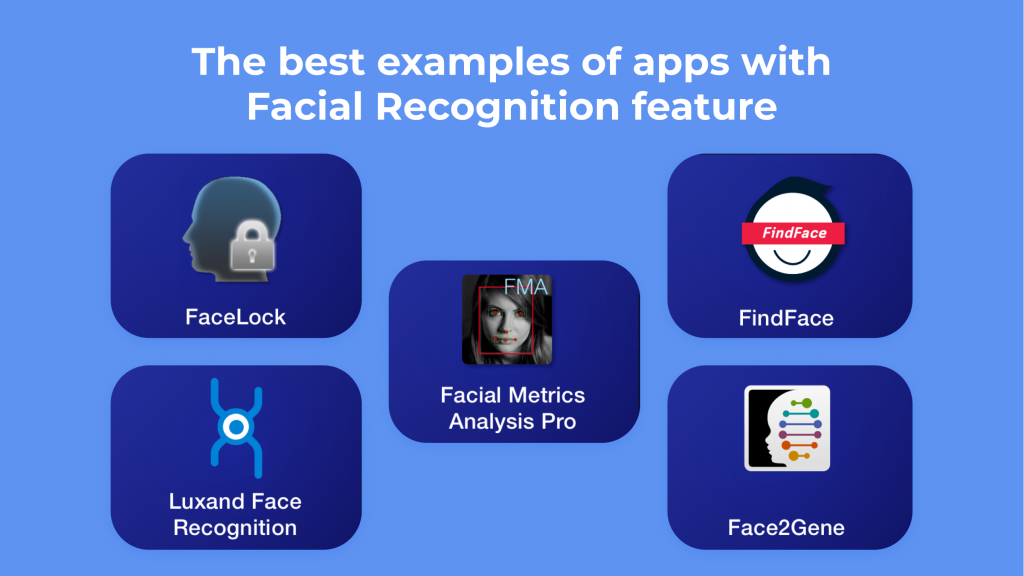 Facelock is one of the very first Android software for facial recognition, aiming at reliable protection. It enables secure files by locking them with the face recognition method. The main benefit is its intuitive regulating functionality. There are two versions available: free one and paid one with advanced tools.

FindFace is another successful illustration of this type of application. It is able to find a person’s social media accounts by uploading his photo. At first sight, the purposes of this app may appear to be middling. However, it involves AI technologies, which allow achieving 95% precise results by checking 250 mln faces instantly. What’s more, developers launched a cross-platform API, usable for both mobile and web applications.

LuxandFaceRecognition is a face recognition app for iOS devices, which is able to detect people. For this, you should simply tap on a face and name it. The system saves it and will define familiar faces in the future. Besides, for projects of higher complexity, the app offers an SDK.

is a face-recognizing application developed for medical purposes. Its program allows spotting various genetic disorders by comparing the user’s uploaded photo with numerous pictures of people with various syndromes to detect likeness. As a result, it can reveal health-related issues fast.

Facial Metric Analysis Pro is another Android application created for amusement purposes. It identifies the celebrity, which has facial features similar to yours.

As you can see, this technology is applied to a wide spectrum of applications.

Pros and cons of facial recognition

Let’s consider its advantages and disadvantages to understand which platforms this technology will be most beneficial for. 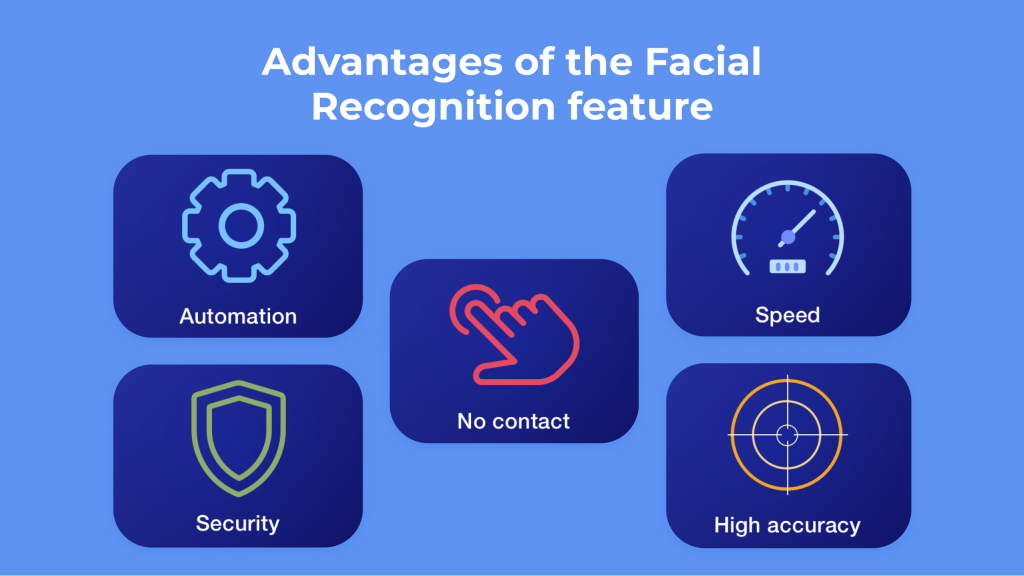 You can view the main pros of facial recognition below:

Face recognition may be relevant for an organization with lots of employees or other purposes requiring to detect lots of people. This technology allows conducting faster contactless verification. Moreover, such a system is more beneficial in comparison to using fingerprints, since putting the fingers of every coworker in the same place is not hygienic, whereas face detecting is safer for health.

Face detection technology keeps developing and enhancing for more efficient performance. If it is integrated with Artificial Intelligence, it will detect the person almost immediately.

The technology allows you to protect not only private information but also prevent the crossing of restricted areas by intruders. Such a system may detect the staff in such large establishments as shopping malls, railway stations, hospitals, or stadiums and allow them to enter but ban strangers from getting in. Primarily, it can come in handy in giant companies or places storing expensive goods.

Automation takes effort, including when implementing face recognition. However, it provides savings in personnel, ensures smooth workflow, and the software development costs pay off in the long term. An additional plus of automated face recognition is the high safety of security personnel.

The human factor can sometimes occur at the most inopportune moment and lead to mistakes. Modern face recognition software is already really precise, but the camera’s quality keeps progressing and providing higher performance and results. Thus, high precision helps better identify lawbreakers trying to disguise themselves or impersonate others.

Cons of the Facial Recognition Technology

Face recognition has lots of profitable features and is extremely helpful in many aspects. Nonetheless, this technology has substantial drawbacks, which are significant to mention: 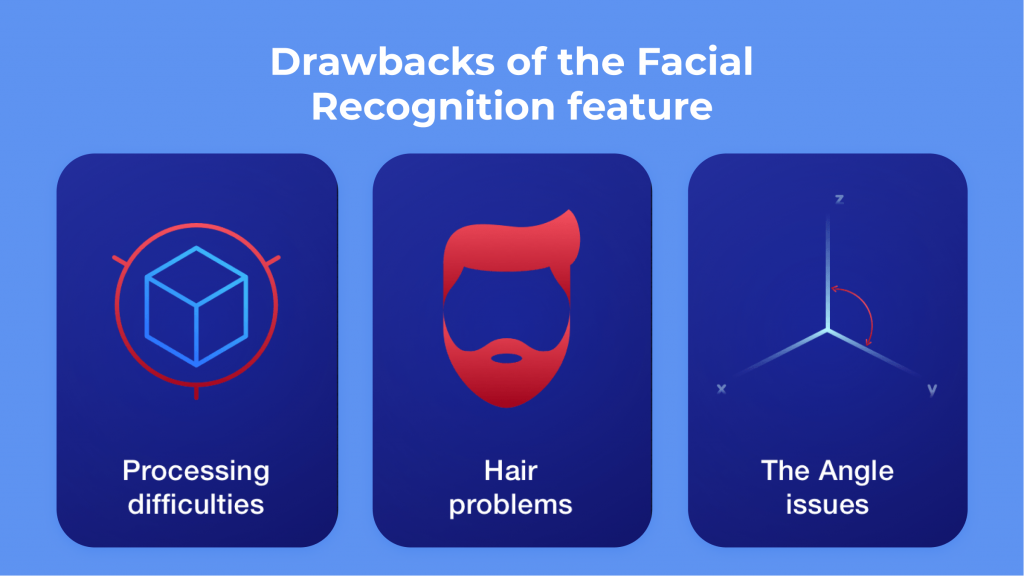 Implementing face recognition is quite costly due to the need for an immense space for storing data and high-quality recording. It must stay in progress 24/7, and this tremendous amount of data needs space to be stored in. What is more, the equipment’s price enabling face recognition, unfortunately, is relatively high.

Another obstacle lies in beards and mustaches, which are undetectable for face recognition. There’s no problem in case a person wears them all the time. But the program won’t identify him after shaving. The main way to overcome this problem is just to shave regularly.

To reach an accuracy of 99.30%, a person has to look straight into the camera and the lighting must be good. Heavy makeup, low light, glasses, and various face angles may affect the efficiency of this technology either. One of the ways to solve it is constantly updating the photos of people.

Keep in mind that this technology is constantly evolving, which means all the above-mentioned issues may be solved soon.

As it was previously stated, some developers introduce face recognition applications in conjunction with SDKs. Let’s overview more profitable, qualitative, and fast instruments with a higher accuracy level. 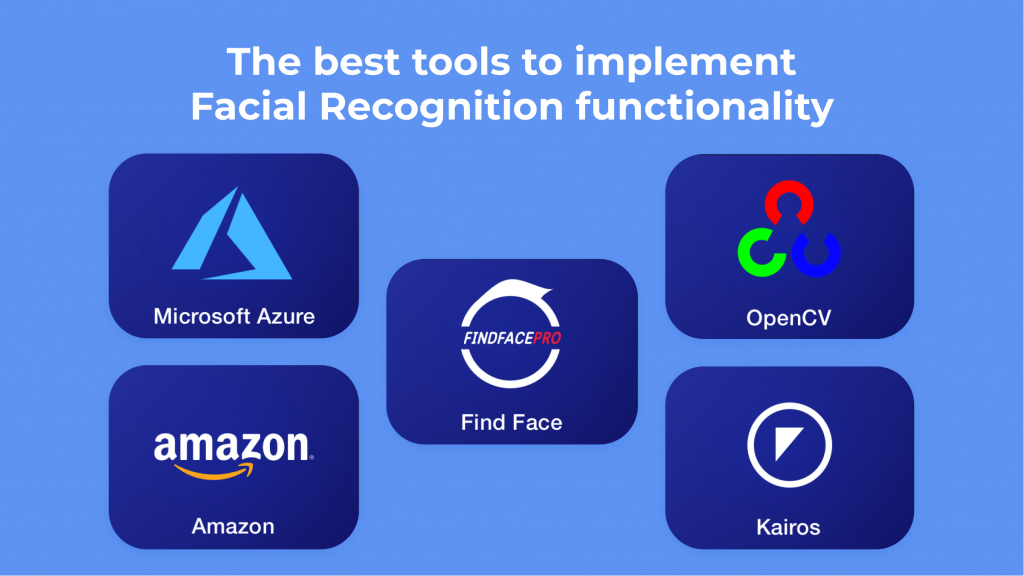 Microsoft Azure suggests an API applicable to your platform. In addition, its tools offer a wide range of features, such as:

Still, a vital drawback is the lack of SDK and no opportunity to operate video recordings either.

OpenCV is an open-source library that allows processing images. It comprises various features, like face recognition, video operation, multi-face tracking. It provides the users with SDK, which unfortunately also has some weak spots. This program isn’t able to process images, identify age, gender or ethnicity and an API is also absent, which is also a disadvantage.

Amazon offers an API, by means of which you will be able to process faces on images and define various characteristics and parameters of people. But again, they do not facilitate developers with SDK.

FindFace is a cloud API, which primary purpose is photo operating. It can check and verify faces by comparing face parameters on multiple shots, define age, face, gender, and emotions, which is a rare opportunity.

Karios is a rare example of a platform that provides both SDK and an API. This advanced program incorporates many helpful capabilities, such as processing both photo and video material, age identifying, gender detection, and determining gender, ethnicity, and emotions.

We’ve considered the most successful tools for face recognition and the greatest examples introducing this technology. The features provided by this technology will not be relevant for all applications or platforms, but they will definitely come in handy for the particular ones. The implementation of these tools will help strengthen the security level, evolve convenience and significantly reduce costs with automation, which in turn will lead to business development and modernization.

Kate Orekhova is a tech writer at Cleveroad. A writer by day and a reader at night, she’s keen on technology and innovations. Her passion is to tell people about the latest tech trends in the world of IT.

What are the significant benefits of hiring app development Companies?

Why invest in IPO and Its Benefits?

Pros And Cons Of Facial Recognition In 2021