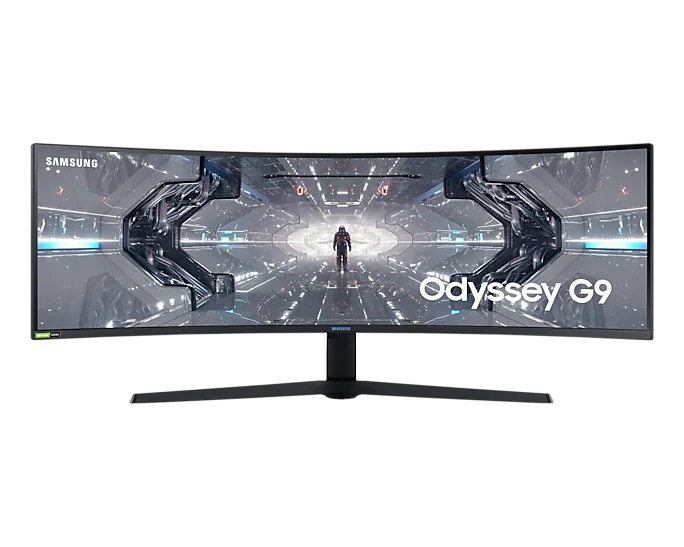 Samsung Electronics is a name that is never taken lightly in the market when it comes to gaming monitors. They are always at the forefront of every major launch and evolution related to high-end gaming. It is this company that has finally come up with the Neo G9, the next generation gaming monitor with a curved screen and the latest addition to the already existing top-notch Odyssey lineup. Not only does the aforementioned curved screen create a perfectly immersive gaming experience but the Samsung Odyssey Neo G9 also comes with Quantum Matrix technology, which is further supported by the Quantum HDR 2000 and the Quantum Mini LED display.

Initially, with the release of the Odyssey G9 back in 2020, Samsung decided to stretch the horizon of the realm of premium gaming monitors with a picture quality that radiated smoothness. Now that the pride of the industry, the first Quantum Mini LED (curved) display, is out in the open it completely overhauls the way games are played as it boosts the gaming monitor category with the most refined detail. The Quantum Matrix technology especially provides the edge as it delivers flawlessly the experience of dynamic picture.

In case you were wondering why you should look forward to this product, what follows is a list of features that sets it apart from all other gaming monitors you can even think of comparing it with.

The Quantum Mini LED technology delivers a spellbinding visual experience and thus achieves the next generation when it comes to depth. The primary factor that contributes to the aforementioned feast on the eyes is the Quantum HDR 2000 that places the Odyssey Neo G9 in a class of its own.

●  A performance that rivals all other gaming monitors

Be it in online or offline gaming, the slightest mismatch between the input and output can determine whether you win or lose a match. That is where the Odyssey Neo G9 shines. With a refresh rate at 240 Hz, the response time shoots up to lightning speed. Also, fully adaptive support of FreeSync Premium Pro and G-Sync cannot hurt your chances.

With an increase in local dimming zones to 2,048 and the combination with the highest black levels measured at 12 bits, the Quantum Matrix technology pairs up with the Quantum Mini LEDs and delivers an unparalleled picture quality.

One of the highest attainable HDR levels in contemporary gaming technology is the Quantum HDR 2000. If you want to avoid missing out on data, since even the smallest detail matters, the Odyssey Neo G9 offers an exquisite standard of brightness that unlocks a previously unknown layer of depth to the beholders.

●  When you say the Odyssey Neo G9 gives shape to your imagination, you are not too far from the truth

Gaming has always been and will always be a form of escape from the oppressive reality we live in. The wideness of the gaming monitor sporting Dual Quantum HD and measured at 49 inches can be compared to two QHD monitors placed side by side. In other words, by using this you will not miss out on any part of the action whatsoever.

●  Why leave space to spare when you have a screen that perfectly fits your vision?

The standard gaming monitor in the market spans 27 inches. What if you had the option to make it double? The Odyssey Neo G9 comes in 1000R as opposed to 1800R, 2300R, or 3800R. In other words, you are excused from experiencing needless strain as the curvature matches that of the average human eye.

Do you want to show off your system to your friends or acquaintances? The machine that is your pride cannot be complete without stunning and intricate lighting. The Odyssey Neo G9 comes with the highly popular Infinity Core lighting that can give a special feel to your desktop.

●  In a world of competition, speed is your best friend

When it comes to competitive online gaming, the leaderboards are where you show your raw skill and dedication to stand at the very top. Want to make that experience even smoother? The Odyssey Neo G9 offers a 240 Hz refresh rate and as low a response time as 1 ms. This means you have access to four times your usual rate of frames per second, and since even a fraction of a second can determine the gap between victory and defeat, your chances of winning go up by four hundred percent. The grey to grey response time is the latest in data transfer technology.

Reflexes vary from person to person. But even if you possess a super-fast reaction time, it is still a waste in case your machine suffers from input lag. The new gaming monitor comes with an incredibly low input lag. No matter how much your targeted enemy prides themselves on their agility, they are no match for a 2 ms response accuracy. No one can humanly oppose the synchronization between the game and one’s peripherals.

With its futuristic rear Infinity Core lighting system (which includes 5 lighting options) and glossy white exterior, Samsung’s Odyssey Neo G9 gaming monitor is suitable for use in any given setup or environment. With its inclusion of 52 colours to personalize it to one’s choices, immersion has never been easier. Additionally, the system also sports the Auto Source Switch+ which enables the detection of connected devices as soon as they are turned on. This world-changing technology was slated for opening pre-ordering from the 29th of July, 2021, and direct purchase in the global market from the 9th of August, 2021.

Things To Know About Fun888 เข้าระบบ

All You Need To Know About Optimising The Angular App

7 Ways To improve the speed of your Router