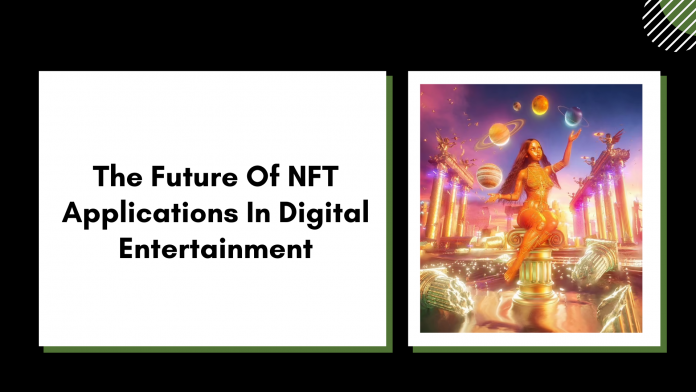 Before the outbreak, few had heard of NFTs. These digital tokens are frequently associated with digital art and collectibles. Blockchain technology is used for digital trading assets like bitcoin and ether.

NFTs can be anything digital, including digital art, memes, music, and tweets. Buyers and sellers primarily determine the value of the NFT. Although a piece of digital art may not appear to be valuable, the highest-selling NFT sold for $69.3 million.

There is no need for one coin to be differentiated from another, as the blockchain ensures the proper value of each transaction attributed to it. With cryptography, NFTs are easy to trade and have no difference, thus making fungible tokens great for the currencies.

The global entertainment industry is the most valuable globally, worth over $2.2 trillion. Along with this, this industry is a massive part of our culture. For over a century, the business has never failed to enthrall its audience with appealing movies, TV shows, and music.

From making films to producing and distributing them, NFTs applications can completely transform the ways of democratizing. The first big-budget Hollywood film to be paid for by the NFT community is the “Arabian Camels’ Antara Project.”

NFTs in digital entertainment foster the community members to create some digital collections. It provides a deep user engagement and interaction and a massive opportunity for mixed-reality experiences. NFTs can be any character avatars or any video clip from the films.

Music NFT marketplaces help the growing artists, musicians, directors, and other staff gain popularity in the industry. For instance, let us take the example of Hollywood artist Ban Mauro. In seven minutes with his NFT collection, he earned much more than he made by working 12 years in the Hollywood industry. Like him, any emerging artist can generate high revenue and get high visibility in the industry.

The entertainment sector has operated in secrecy, preventing outside involvement—this strict business style severely limited prospects for new artists trying to break into the industry. However, by incorporating the NFT, the entertainment business is now welcoming a broader range of artists, producers, and spectators.

While producers and creators now have new options to monetize their work and raise finances, viewers now have a chance to directly participate in industry events, not just to fund films but also to profit from their success. In the years to come, this symbiotic relationship between fans and producers could reshape the landscape of global entertainment.

How NFTs Can Be Used In Digital Entertainment Industry

Here are some ways NFTs can be used in the entertainment industry. Have a look:

We all experienced the digital ecosystem transition when the COVID-19 pandemic affected and changed the world. Even after the pandemic, the shift into the digital world remains active. This gives rise to NFT and blockchain and opens a successful path for the entertainment sector.

With increased customer demand for AR/VR products, entertainment will become virtual in the future. Using a combination of visual animations and immersive technology, entertainment content may be made immersive and realistic. Once these are completed, NFTs can protect access to the original content by preventing imposters from gaining access. This will change the face of online entertainment and encourage more decentralized creativity.

NFT may be the ideal answer for reducing the risk of false asset ownership claims. It is difficult to manufacture and circulate counterfeit ownership credentials securely recorded in the blockchain with digital ownership credentials. This gives content providers and consumers more control over how their lawful transactions are protected. It could eventually end internet piracy with advanced encryption-based file transmission technologies.

Well-known artists and entertainment companies have numerous avenues to distribute and sell their work. In other cases, lesser-known artists struggle to do so due to a lack of funding and the substantial commissions that distribution platforms earn by acting as middlemen. This may be avoided with NFTs because emerging artists can create an audience on any social media platform and then issue their own NFT tokens.

The entertainment industry is frequently criticized for regulatory and legal compliance framework infractions when content is transmitted globally. Rules, pricing, legal, and other ownership rights can differ from country to country. NFTs can play a role in autonomously controlling compliance and regulatory checks to guarantee that content owners follow local laws when their content is sold or consumed.

An artist or musician can create an original score and sell it to fans directly through the NFT marketplace like Opensea. They can even use the NFT framework to sell the file to distribution businesses. The owner of the original material can enable an NFT feature that pays them a royalty or a percentage commission for each digital resell of the content, whether by an initial purchaser or a distributor.

NFT Use Cases In Digital Entertainment

NFTs are mainly used to create digital art. High-profile auctions of NFTs linked to digital art have attracted public interest. Merge, by artist Pak, was the most expensive NFT, sold for US$91.8 million at auction in 2021, followed by Everyday: the First 5000 Days, by artist Mike Winkelmann, for US$69.3 million.

Bored Apes, EtherRocks, and CryptoPunks, among other NFT collections, are examples of generative art. Several simple graphic components are combined to create a range of visuals.

In-game assets such as digital land parcels can be represented using NFTs.If crypto games can be traded on third-party markets without the game maker’s approval, some observers believe that they are controlled “by the user” rather than the game developer.

Certain premium manufacturers released NFTs for online video games. In November 2021, Morgan Stanley published a study projecting that this use might reach a multibillion-dollar market by 2030.

In February 2021, artists selling artwork and music as NFT tokens reportedly made over $25 million in the music industry. To mark the third anniversary of his Ultraviolet album, electronic dance musician 3LAU auctioned a collection of 33 NFTs for a total of US$11.7 million in 2021.

On March 3, 2021, an NFT was released to promote the Kings of Leon album When You See Yourself. Rapper Lil Pump, record producer Mike Dean, and rappers like Eminem are among the musicians who have used NFTs.

In November 2021, Quentin Tarantino, the director of Pulp Fiction, issued seven NFTs based on uncut footage. Miramax subsequently filed a lawsuit, stating that their film rights had been violated and that their 1993 arrangement with Tarantino granted them the right to issue NFTs related to Pulp Fiction.

Many online memes have been linked to NFTs manufactured and sold by their creators or subjects. Examples include Doge, a Shiba Inu dog, Charlie Bit My Finger, Nyan Cat, and Disaster Girl. Some of the people who created the first memes have finally cashed in on the latest NFT frenzy if you grew up on the early internet.

The entertainment sector has operated in secrecy from its inception, preventing outside involvement. This strict style of doing business severely limited prospects for new artists trying to break into the industry. However, with the NFT integration, the entertainment business is now welcoming a wider range of emerging artists.

NFT token development companies have the potential to radically alter the entertainment industry. With increased internet penetration, online awareness, and a growing tendency for consuming material online rather than through physical channels, the future of NFTs is bright.

How to do betting Esports and Definition of Esports

Storage Rogers AR: Advantages Of Your Storing Your Boat

What makes your CRM important to your digital strategy?